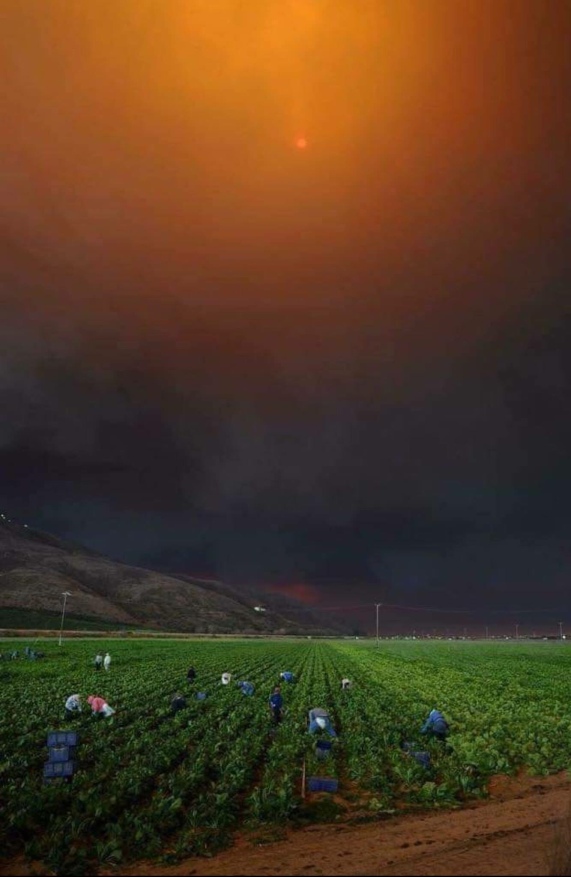 Today’s prompt is to write something using this photo as inspiration. I don’t know the original image source unfortunately, but I saw it on Facebook earlier today with the caption: “Farm workers in California continue working while the fires blaze.” It reminds me of one of the YA novels I started last year in which a human-caused ecodisaster blocks the sun, causing an unstoppable super winter set to wipe out all human life on earth.

There are a lot of things I see when I look at this photo beyond fantasy though. It’s pretty terrifying to witness something so post-apocalyptic happening right now. It also snowed in the northern part of my home state of Louisiana, today. Currently, I’m huddled next to a space heater in snow boots and a down parka typing with numb fingers somewhere in the middle of New Orleans. Yesterday, my phone wouldn’t quit buzzing at work from a tornado warning. And last week it flooded within a matter of minutes at the beginning of a thunderstorm. None of this is normal.

For these reasons, I feel torn between a political essay about migrant workers in CA and a short story in the same vein as the YA mentioned earlier.

Either way, this prompt doesn’t have many restrictions, aside from using the photo as inspiration for your opening scene. Any genre is fine. Try to write at least 500 words.Use at least one color. Mention the word “burning” somewhere, whether in or out of context of the CA wildfires.

Feel free to post what you come up with in the comments section. I’d love to read it!

View all posts by lizmcgehee